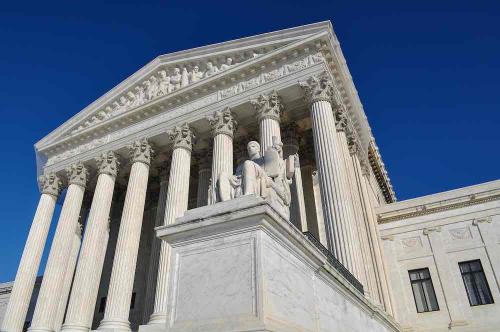 Heralding a flood of opinions in the remaining weeks of the term, the Supreme Court today decided five cases. Some of them support the media/popular equation of a political party background with case law results, but others clearly do not. Interestingly, several cases decided by wide margins, through agreements and dissents, also set markers that could affect future case outcomes.

Let’s start with United States against Vaello Madero. With only Justice Sotomayor dissenting, the majority of eight agreed with Justice Kavanaugh applying the Constitution’s Territorial Clause – which states that Congress may “make all necessary rules and regulations respecting territory.” . . belonging to the United States”, art. IV, §3, cl. 2 – and grants Congress broad authority to legislate with respect to U.S. territories, such as Puerto Rico. Vaello Madero began receiving Supplemental Security Income (SSI) while residing in New York City, and he continued to receive SSI payments when he moved to Puerto Rico, where, by law, SSI is not available. In upholding the government’s ability to recover the respondent’s improper payments, the Court reiterated that the Constitution does not require Congress to extend SSI benefits to residents of Puerto Rico. Quoting Califano v. Torres435 US 1, and Harris v. Rosario, 446 U.S. 651, the Court applied the deferential rational basis test to uphold Congress’s decision not to extend SSI to Puerto Rico, noting that because Congress chose to treat residents of Puerto Rico differently from residents of the United States for purposes of tax laws, it could do the same for employee benefit programs. Justice Sotomayor’s dissent is based on her argument that the Equal Protection Clause somehow negates the Territory Clause and the Court’s precedents applying a rational basis test for tax and social distinctions. The fact that she is alone in this case thus far demonstrates, once again, that even most liberals, especially the increasingly influential Justice Kagan, will base their decisions on the meaning and original text.

I find the two concurring opinions more interesting. As Judge Thomas joins the majority, he signals that he no longer accepts the premise that the due process clause of the Fifth Amendment contains an element of equal protection whose substance is “precisely the same” as the protection clause equal to the Fourteenth Amendment, as was the case held in Weinberger v. Wiesenfeld, 420 US 636, 638, n. 2 (1975). Instead, he posits that “[f]A stronger ground for prohibiting the federal government from discriminating on the basis of race, at least with respect to civil rights, may well be found in the citizenship clause of the Fourteenth Amendment. This is clearly a thought that will come back. Judge Gorsuch, who also joined the majority, also separately agrees to sound the death knell for the so-called “island cases”.,which argued that the federal government could govern Puerto Rico and the other territories without regard to the Constitution. Given the way the present case was decided, it was certainly not necessary for the Court to rule on the island cases, but Judge Gorsuch nevertheless condemned these racially stereotypical and extra-constitutional views.

Boechler, PC v. Internal Revenue Commissioner is a unanimous opinion of the Court, delivered by Judge Barrett, that the 30-day period provided by 26 USC § 6330(d)(1) to file a motion for review of a determination of due process taxes is a non-jurisdictional time limit subject to a fair toll. Cautioning that not all procedural requirements are jurisdictional, therefore cannot be waived or otherwise subject to equitable exceptions, the Court, again applying a strict textual analysis, concluded that a procedural requirement is jurisdictional only if Congress “clearly states” that it is. Interestingly, Boechler, PC, is a law firm, not the kind of individual plaintiff who typically struggles to meet deadlines. Here, however, his inadvisable lateness was excused.

Brown v. Davenport is a habeas corpus cases, and the 6-3 split of justices along strict conservative/liberal lines reflects the hostility that conservatives have towards post-appeal procedural challenges, as is the case with the leniency that liberals would allow particularly in cases of serious crime. Brown was convicted of first degree murder following a jury trial in which he was at times visibly chained and placed behind a “privacy screen”. He naturally argued that his conviction should be overturned in light of Deck vs. Missouri, 544 U.S. 622, in which the Court held that the Due Process Clause of the Fourteenth Amendment generally prohibits shackling a defendant at trial absent a “special need”. The Michigan Supreme Court agreed that a Platform violation occurred and that there was no particular need, and therefore referred the matter back to the trial court to determine under Chapman v. California, 386 US 18, that the error was harmless. Then, after failing in remand and subsequent appeals, Davenport sought federal habeas relief. The district court ruled that the remedy was not warranted under the Anti-Terrorism and Effective Death Penalty Act of 1996 (AEDPA), which limits the power of federal courts to award habeas relief to prisoners of war. ‘State. See 28 USC §2254(d). A divided Sixth Circuit panel reversed itself, declining to review the case under AEDPA, saying its review was governed only by Brecht v. Abrahamson507 US 619, which held that a state prisoner seeking to challenge his conviction based on a decision of a state court Chapman the error must show that the error had “a substantial and prejudicial effect or influence” on the outcome of the trial. In an opinion delivered by Justice Gorsuch, the Court held that a federal court cannot grant a habeas remedy without applying both the test that this Court set out in Brecht and the only Congress mandated by AEDPA. Further finding that Brown could not satisfy the AEDPA, the Court struck down the Sixth Circuit. In a scathing dissent, Justice Kagan decries what she claims is the majority’s abandonment of recent decisions that Brecht necessarily subsumes the AEDPA, and that satisfying the first “necessarily” means that the second is satisfied. It thus claims that the analysis of the majority “will never lead to a different result” and thus maintains that its request is “useless”.

The Court returned unanimously in Cassirer c. Thyssen-Bornemisza Collection Foundation. In another application of textualism, now embraced by at least two of the liberals, particularly Judge Kagan, who wrote the opinion, the Court analyzed the Foreign Sovereign Immunities Act of 1976 (FSIA), 28 USC §1602 and following., which governs whether a foreign state or foreign entity may sue in a U.S. court, to decide which choice of law rule a court should use to determine the applicable substantive law in a lawsuit FSIA raising non-federal claims. Art lovers may know that the case arose out of a dispute over the ownership of Camille Pissarro’s Impressionist painting: Rue Saint-Honoré in the Afternoon, Rain Effect. The brief opinion shows that the Court had no difficulty in concluding that, in an action by the FSIA raising non-federal claims against a state or foreign entity, a court should determine substantive law using the same rule of conflict of laws applicable in a similar case. bring an action against a private party, i.e. by applying the choice of law rule of the forum State and not a rule deriving from common federal law.

Finally, in a well-watched First Amendment case, though it has little to do with more common free speech issues, the Court ruled on the high-profile case from Austin, Texas, regarding the regulation billboards. City of Austin v Reagan National Advertising of Austin, LLC. Austin specifically regulates signs that advertise things that are not located on the site of the signs or that direct people to off-site locations. In a lawsuit ultimately returned to federal court, the ad company alleged that Austin’s ban on scanning offsite signs, but not onsite signs, violated the First Amendment’s free speech clause. By Reed v. City of Gilbert, 576 U.S. 155, the Court, in an opinion written by Sotomayor J., held that the distinction made by the city between on-site and off-site advertising is apparently content-neutral and was therefore only subject to of an intermediate examination. The essence of the opinion is its conclusion that the City’s by-law did not depend on any real analysis of its content—c. However, the Court held that a determination of facial content neutrality does not end matters, and therefore remanded the case to consider whether the City had an unlawful purpose in the bylaw and whether it was “narrowly tailored to serve a government interest. While Chief Justice and Justice Kavanaugh, and to some extent Justice Alito, joined the liberals, Justices Thomas, Gorsuch and Barrett dissented, arguing, if you will allow me the expression, more liberally than the supposedly liberal majority, which Austin discriminates in a content-specific way, but simply whether the signs promote an on- or off-site event, activity, or service. Justice Breyer will soon be retiring, but if her former clerk, Justice Ketanji Brown Jackson, follows the reasoning behind her deal when she sits on the Court, we could see her join the three conservative dissenters in future Prime Minister’s cases. amendment where scrutiny is strict. being argued.

Buckle up to act in the next two months. As indicated, there is a large file awaiting resolution.