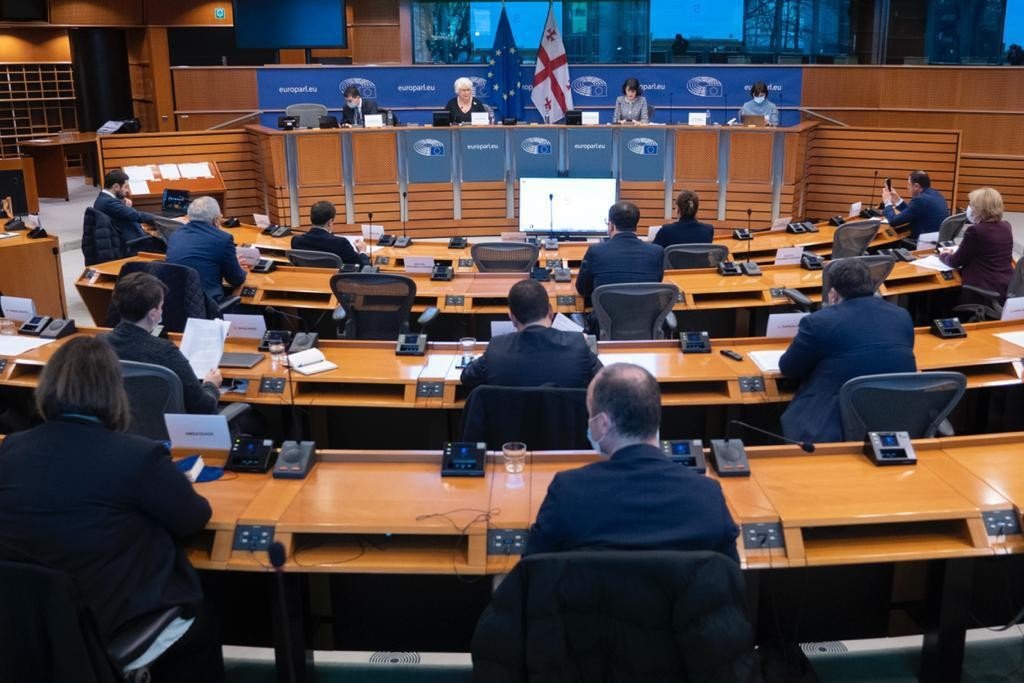 MEPs and Georgians gathered for the tenth session of the EU-Georgia Parliamentary Association Committee in Brussels on 10 February.

The Association Committee, which monitors the implementation of the EU-Georgia Association Agreement, was co-chaired by MEP Marina Kaljurand (S&D, Estonia), Chair of the European Parliament’s Delegation for with the South Caucasus, and Maka Bochorishvili, President of the Parliamentary Commission for European Integration of Georgia.

MEP Kaljurand said on February 14 that while EU lawmakers welcomed the Georgian authorities’ commitment to “further harmonizing” legislation with the EU, “the situation could still be improved in some areas, including the accountability of forces law and order, the independence of the judiciary and the fight against discrimination of vulnerable groups and minorities”.

Namely, she said MEPs during the meeting expressed concerns about “the shortcomings of the Legislative elections 2020 and Municipal elections 2021 as listed in the reports of the OSCE/ODIHR Election Observation Mission; the ongoing appointments Supreme Court justices; the recent reform common courts; the hasty abolition the State Inspection Service; and slow progress Constitutional reform.”

“We recalled that the promise surveys in telephone tapping large sections of Georgian society and diplomatsincluding the EU Ambassadormust provide clear answers in the near future”, underlined the legislator.

In addition, MEP Kaljurand said MEPs highlighted that while Georgia law prohibits all forms of discrimination, the situation for LGBT+ people “remains difficult, as tragically demonstrated by the violent attacks against more than 50 journalists and peaceful demonstrators who forced cancelation of the Tbilisi Pride March on July 5, 2021.”

She stressed that MPs expect the organizers and perpetrators of the violence to be brought to justice, in accordance with “Georgian laws and international commitments”.

The MEP’s statement also underlined April 19 offer “continues to offer a European path towards building stronger democracy and the rule of law” in the country amid polarizing political and media landscapes. “We reiterated the availability of the European Parliament to facilitate a Dialog by Jean Monnet as a means of fostering constructive cooperation between political parties in the Georgian Parliament.

According to the lawmaker, the parties also discussed a package of reforms that Georgia is carrying out to comply with the Association Agreement, with MPs hailing the Georgian authorities’ willingness to “exploit the vast potential of the AA/DCFTA” .

In addition, EU lawmakers welcomed the introduction of mandatory gender quotas in parliament and local councils as well as the passage of the Disability Rights Act.

The statement also underlines the support of European lawmakers for the independence, sovereignty and territorial integrity of Georgia, condemns the actions of Russia which lead to a deterioration of the security situation and human rights man in occupied Abkhazia and the Tskhinvali region/South Ossetia and pledges to support the EU’s efforts to “promote a peaceful resolution of the conflict.

Statements by the Georgian delegation

The parliament declared on 11 February that the co-chair of the meeting, Maka Bochorishvili, stressed the need to establish new cooperation formats to deepen Georgia’s integration into the EU, in particular by facilitating dialogue between experts and politicians.

She said this became evident after Georgia announced its candidacy for EU membership in 2024, and also argued that the country, for its part, continues to carry out the reforms necessary to bring it closer to the EU. EU.

The Ministry of Reconciliation reported on 11 February, that she underlined the importance of the EU’s efforts to secure the release of the arbitrarily detained Georgian citizens and underlined the need to bring to justice those responsible for the death of Davit Basharuli, Giga Otkhozory, Archil Tatunashvili and Irakli Kvaratskhelia.

The Foreign Ministry said on February 12 that Deputy Minister Lasha Darsalia for his part briefed the participants on the intensification of “de facto annexation processes” and the militarization of Russian-occupied regions.

He also stressed the need for Russia to respect its commitments of the ceasefire agreement of August 12, 2008, negotiated by the EU, according to the same report.

Meanwhile, Deputy Minister Janjalia underlined the need to deepen EU-Georgia cooperation in defense and security and outlined the objectives of the Associated trio from Tbilisi, Kiev and Chișinău.

This position is also available in:
ქართული (Georgian) Русский (Russian)