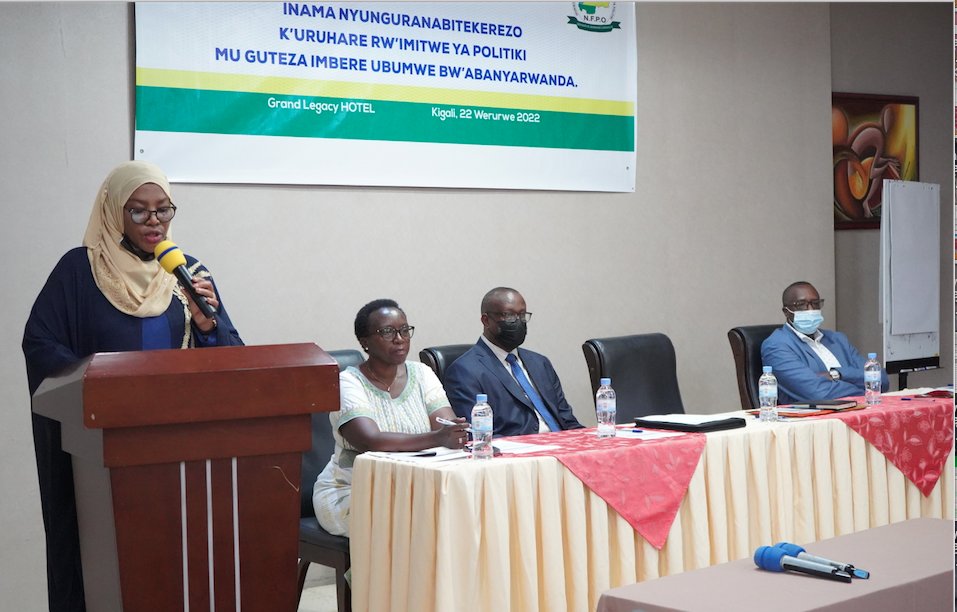 The National Consultative Forum of Rwandan Political Organizations (NFPO) had said that it had left the politics of division behind and therefore had no time for anyone who wanted to bring back an episode that plunged the country into the 1994 genocide against the Tutsis.

According to NFPO officials, this divisive policy was a fabrication of politicians who had invested in the “us versus them” ideology.

The finding was made during a one-day meeting that brought together politicians, the Ministry of National Unity and Civic Engagement (MINUBUMWE) and young people from different political parties in Kigali on March 22.

“Such a meeting is an opportunity to teach young people about the dangers of the politics of division, hatred and discrimination that characterized the old regimes of our country. Young people should be educated about the people responsible for the past catastrophe, how the genocide was implemented and the efforts they made to destroy the country,” said Fatou Harerimana, spokesperson for NFPO .

“Currently, political parties have not fallen into this misery. They are trying to follow the constitution and other laws which aim to achieve the unity of Rwandans. As politicians, we have a responsibility to build a better and more inclusive future for Rwandans. Time and time again we see individuals who practice a politics of division. We never comment, we don’t have their time because if we did, it would give them a strength that they don’t have and don’t deserve,” added Harerimana, also from the Ideal Democratic Party ( IDP).

Other parties include the Solidarity and Prosperity Party and the Rwandan Socialist Party.

According to NFPO, all current political parties have differences, but share the responsibility to enhance the agenda for the unity of Rwandans by educating people against the dangers of divisive politics.

“The divisive policy was characterized by ideas of the country belonging to the Hutu among other hateful messages and movements,” said Jean Damascène Bizimana, Minister of MINUBUMWE.

“This policy of division continued until 1994, and more than a million people were killed. Currently, political parties follow the constitution with clear objectives. No politics of discrimination, genocide ideologies. The penalties for these crimes are clear.

According to Bizimana, several political parties were banned due to the practice of divisive politics, including the National Revolutionary Movement for Development (MRND) which is also responsible for implementing the Genocide against the Tutsi.

“The destruction of Unity of Rwandans is part of history, teaching some to hate others. This was done by political parties like Parmehutu. As young people, we are game changers,” said Vladimir Bovary Niyonsenga, a participant.

“With Patriotism and Unity of Rwandans, the country will develop. None of the political parties that implemented the genocide still exist, these are the consequences of a policy of division, of destruction.