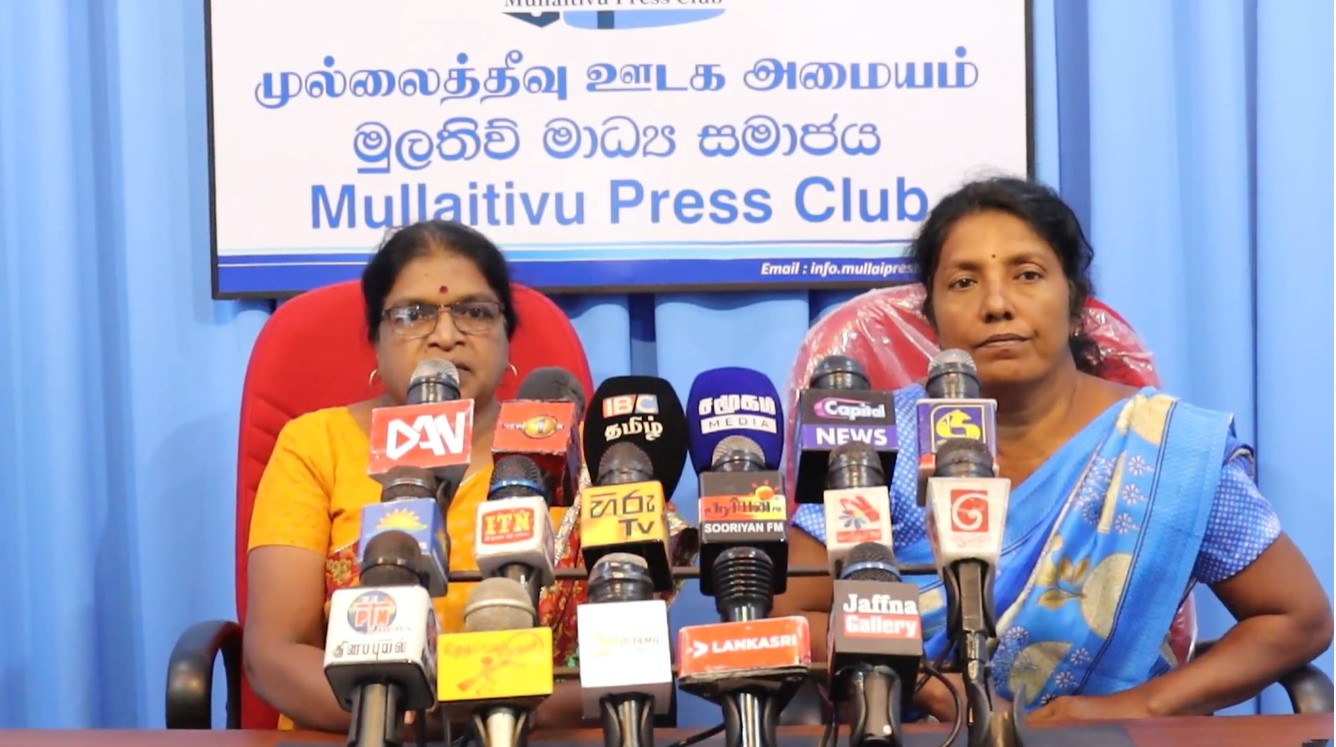 Prabhakaran Ranjana and Mariyasuresh Eswari speak to the press (September 12, 2022)

Leaders of the Mullaitivu Association of Relations of Forced Disappearances condemn statements by Sri Lankan Foreign Minister Ali Sabry at the 51st session of the UN Human Rights Council in which he rejects international mechanisms accountability by invoking the need to protect the “sovereignty of the people of Sri Lanka.”

At a press conference in Mullaitivu yesterday, the association’s president, Mariyasuresh Eswari, and secretary, Prabhakaran Ranjana, reiterated their demand for an international investigation and strongly rejected the minister’s claim that Sri Lanka can pursue “tangible progress in the protection of human rights and reconciliation by independent national institutions”.

“In the name of Relations with Enforced Disappearances, we strongly condemn the statements of the Minister of Foreign Affairs. To move forward, he must not be provided with such platforms. He has no right to speak on If he wants money, he If he wants support for economic development at the UN, he can ask that […] However, he has no right to say that he will get justice for [us]. Whoever it is, whether it is a minister or a political representative, or an organization associated with the Sri Lankan government, we ask you not to betray us to protect you, “said the head of the Mullaitivu Association for Relations with Enforced Disappearances, Eswari. to the media.

The statement comes on the 2015th day of ongoing protests by families of the disappeared in the Tamil-populated Northern Province seeking truth and justice. The protesters were subjected to intimidation and surveillance by the police and armed forcesto prevent them from demonstrating peacefully.

Mariyasuresh Eswari was appalled by the lack of dialogue on the issue of enforced disappearances during the 51st session of the HRC, despite continued protests from families of the victims.

“The opportunity to speak with the press during this time came following the start of the session of the United Nations Human Rights Council. It is necessary that we express our pain and our sorrows at this time and our many expectations. […] it was painful to note that the question of enforced disappearances and the conditions of political prisoners were absent from the speech. We constantly protested for an international investigation, sacrificed our lives, without asking for money […] but for justice. It is clear to the UN […] that we rely on them […] We are protesting for human beings, the human race, to recover human lives, to recover our loved ones,” she said.

Prabhakaran Ranjana expressed a similar sentiment, saying, “[t]o undermine our protest and because they don’t see our lives as having any value, Ali Sabry, who works under the Sri Lankan government […] and who does not care that we are in search of our relations, says that a domestic process is sufficient. However, we will never accept this. We want the Sri Lankan government to be prosecuted, to be forced to admit its crimes. Until we know what happened to our relationship, our protest will continue.”

She goes on to recall that the Minister did not attend a demonstration led by the Mullaitivu Association for Enforced Disappearance Relations during his last visit to the region and speaks of the lack of trust between the families of the victims and the Sri Lankan State:

“[w]We organized a demonstration the last time he came to Mullaitivu. He did not have the courage to come and see the families of the victims of enforced disappearances. He didn’t have the courage to look us in the face, but he knew how to go to the United Nations and defend the national mechanisms. The man who ran out the back door, how is he going to find a solution for us? We do not trust the Sri Lankan government or anyone working for the Sri Lankan government, including ministers. […] We will continue our protest until a solution is found through international mechanisms.”

Eswari reinforces Ranjana’s statement by sharing her anguish and frustration over the Sri Lankan state’s neglect to address the suffering of the victims’ families:

“Although we are human beings in Sri Lanka, what freedom have they given us? We fight for our race and our rights. They stole our land. They subject political prisoners to extreme torture. […] They are the ones who committed the crimes and tell us that in this criminal cage, they will bring us justice […] We are not fooled into falling into the trap.”

Sabry noted that the Office for Missing Persons (OMP) has started the “investigation and verification process”.

However, since the creation of the office in 2016, the office has yet delivered no truth or justice Tamil victim-survivors. The Tamil families of the disappeared have rejected the OMP for its lack of independence and for not holding anyone responsible accountable.

Civil society organizations and Tamil activists have also condemned the PKO as a mechanism used by Sri Lanka to “deceive” the international community.

Bachelet’s report also noted that “although the purpose of the OMP is to find and search for the missing, it has not been able to find a single missing person or clarify the fate of the missing in a meaningful way, and its current focus is to expedite the closing of cases”.

Eswari pleads with the HRC to oversee an international investigation and a real path to truth and justice: “[w]We have a request for the HRC commissioner. Based on human dignity, we demand our rights […] They must bear the burden of the victims of enforced disappearances. They have to give us our rights.”