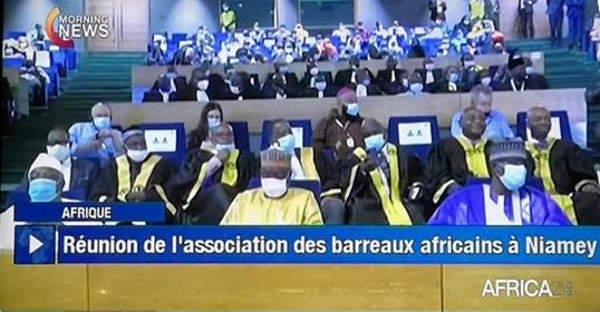 Venezuelan government envoy Alex Saab was flown to the United States on Saturday after more than a year of detention in Cape Verde. The Venezuelan government denounced the “kidnapping” of the businessman, recalling that he carries a diplomatic passport, while his defense team pointed to irregularities and political pressure as the demand extradition went through Cape Verdean justice.

In the following article, written before the extradition, lawyer John Philpot and solidarity activist Roger Harris recap efforts to bring attention to the case and its implications.

An international Free Alex Saab delegation attended the annual meeting of the African Bar from October 3-7 in Niamey, Niger. Venezuelan diplomat Alex Saab has been under arrest in Cabo Verde since June 2020 by order of the United States and is fighting extradition to Miami. His “crime” is to organize humanitarian missions to deliver food and medicine to Venezuela in “violation” of the illegal US blockade.

The Free Alex Saab delegation was well received by the conference, which was attended by many honored African leaders, including the President of Niger Mohamed Bazoum as well as the former Presidents of Nigeria, Sierra Leone and Liberia. Some speakers were already aware of the flagrant excess of American justice, which led to the seizure of Mr. Saab in his plane, while he was making a refueling stopover in Cabo Verde on the road from Caracas to Tehran.

The 50-year-old African Bar Association (AFBAR) is a professional body bringing together individual lawyers and national legal associations in Africa. The association brings together the five African sub-regional associations spread over the continent. AFBAR seeks to promote policies aimed at improving the socio-economic and political development of the continent.

AFBAR President Hannibal Uwaifo delivered the opening speech on respect for the rule of law in strong opposition to military coups. One of the recurring themes of the conference was the importance of solving African problems in Africa without Western interference. For example, AFBAR will not support cooperation with the International Criminal Court’s investigation into the Nigerian military and Boko Haram unless the investigation includes how Boko Haram is funded.

One participant, a young lawyer, explained that independence requires full national economic and military control. According to him, with French and especially US military presence in many countries, politicians can take their orders from outside powers.

Some African countries are independent like Algeria, which strictly controls its own borders and its economy without neo-colonial control. Obviously, Cape Verde, one of the smallest and poorest countries in the world, is struggling to resist American pressure on Mr Saab.

The regional court of the West African Economic Community (ECOWAS) had ordered Cabo Verde not only to release but to pay $ 200,000 in damages to Mr. Saab. It was March 15, 2021 and Cabo Verde still has not complied with the court order. Nonetheless, Cabo Verde has signed and ratified the treaty establishing the court, attended hearings, is a full member of ECOWAS, and has at least one judge on the court.

As the AFBAR conference reaffirmed, it is the duty of bars to defend the ECOWAS Court. The conference session on the ECOWAS Court made it clear that it was not a court of appeal, but an international court of first jurisdiction created by treaty. Saab’s delegation achieved full status during the session, during which delegates Felipe Teixeira and Laila El Dine met with AFBAR President Uwaifo in attendance.

The international delegation of Free Alex Saab held a press conference, presenting the case to the local media for the release of the Venezuelan diplomat.

John Philpot presented and distributed copies of the “We Don’t Deserve This – The Impact and Consequences of US Sanctions” report, which deals more broadly with unilateral coercive measures imposed on some 30 countries – including 15 in Africa – including a third of humanity. Philpot, along with Rick Sterling and David Paul, wrote the full report for the Sanctions kill the coalition. A free PDF of the report is available in line.

In a session on contemporary legal issues and the rule of law, Laila El Dine and John Philpot presented the Alex Saab case raising issues that go to the core of his illegal detention. AFBAR President Uwaifo reiterated the need to take positive steps to ensure compliance with the ECOWAS Court ruling of March 15.

John Philpot pointed out that these critical cases can be won, citing Meng Wanzhou’s recent campaign post. She had been illegally detained by Canada for more than 1,000 days in an attempt to extradite her regarding a transaction between a Chinese bank and Iran, allegedly in violation of U.S. sanctions against Iran. America’s excess of justice can threaten diplomats and businessmen around the world if this trend is not stopped.

The closing session included resolutions followed by two press conferences, where the issue of Free Alex Saab was discussed and further supported. AFBAR press conferences, chaired by Mr. Uwaifo, presented the challenges of the defense of Alex Saab, including compliance with the decision of the ECOWAS Court. International delegates El Dine, Philpot and Teixeira spoke at the second press conference.

AFBAR has taken the issue of the ECOWAS Court seriously, although the Vice-President of the Court lamented the lack of enforcement mechanisms. Proposals have been put forward such as the imposition of sanctions against Cape Verdean officials, which would be legally constructed according to the regional community of ECOWAS and not illegally as with unilateral American sanctions. Other measures considered were the expulsion of Cabo Verde from ECOWAS and special legal procedures. A committee has been formed to actively deal with this issue, chaired by the Chief Prosecutor of Liberia, Sayma Syrenius Cephis.

The opinions expressed in this article are those of the authors and do not necessarily reflect those of the editorial staff of Venezuelanalysis.

Gambia: GRTS policy and political party coverage ahead of elections