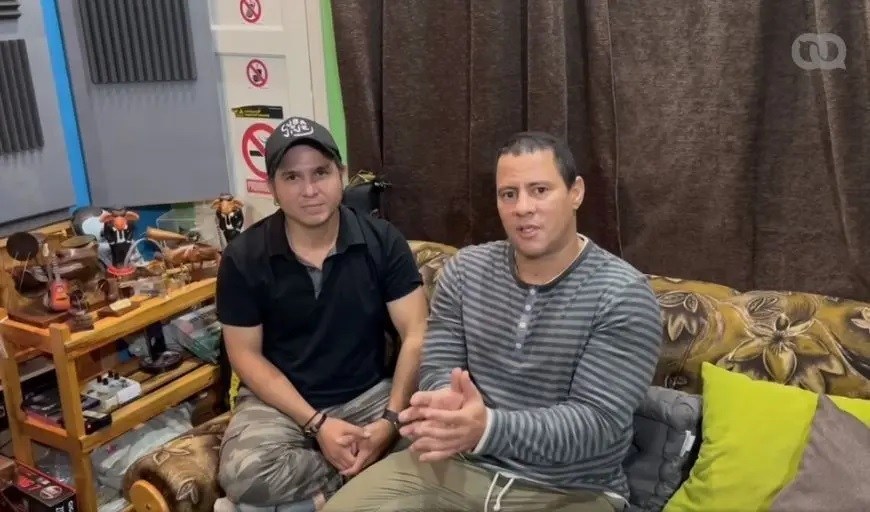 HAVANA TIMES – Cuban band Buena Feand in particular its manager Israel Rojas, have clashed with supporters and detractors on social media in recent months, due to its pro-government stance and ignoring other viewpoints.

Originally from the province of Guantanamo, Buena Fe emerged as a music group in 1999, with the duo Israel Rojas and Yoel Martinez. Rojas is the composer of all the band’s songs and the lead singer, while Martinez plays acoustic guitar and is the second vocal. Their career spans over two decades on stage, 11 albums, excellent media coverage and an active social media presence.

They have been part of the cultural and political face-to-face that has polarized opinions since November 27, 2020, when more than 200 artists gathered in front of the Ministry of Culture to demand dialogue and freedoms. Even though the leaders of the group were present, they clearly expressed their support for the system and its institutions.

They also took part in actions carried out by the government within the framework of this political conflict. For example, they organized a concert on November 13, 2021 for participants in the Red Bandanas sit-in at Parque Central in Havana, which was one of the answers – along with the interrogations and police sieges of activists, independent journalists and artists – to the call for a civic protest for change through the Archipelago platform, scheduled for November 15.

Additionally, they have a close relationship with Cuban President Miguel Diaz-Canel Bermudez, who tweeted on February 7, Israel Rojas’ birthday, to wish him a good day and thank him personally.

This openly pro-government stance and distancing itself from other human rights demands and asking no questions about repression of the arts sector, has made the group a target for critics, especially those who oppose the Communist Party system. Since November 2021 alone, they have been at the center of nine heated debates in the digital space.

PROTESTS AGAINST CONCERTS OUTSIDE CUBA

Between February 7 and 13, the group traveled to Panama to participate in the official inauguration ceremony of the cultural space House Cuba, Showcase. They were invited by the Jose Marti Association of Cuban Residents in Panama. This trip is the latest news that has reignited the discord between critics and supporters of the group.

While in Panama, they participated in an artistic gala ceremony at the National Theater of Panama on the 11th, and they gave a concert at House Cuba, on Saturday 12, date of the inauguration of the center. In the latter, a small group of Cubans – as can be seen in the videos shared by the demonstrators – gathered to protest against the government of the island, against the presence of Buena Fe in this country and against the Cuban residents of Miami coming to the show, Carlos Lazo, leader of the Puentes de Amor project, and Erich Concepcion, singer and actor.

Lazo and Concepcion were in Panama to help set up Casa Cuba, showing their support for the Puentes de Amor project which advocates the lifting of the American blockade.

Protesters outside the Panama Cultural Center were unable to stop the band from performing.

It’s not the first time that Buena Fe concerts have sparked protests or boycott attempts outside Cuba’s borders. In January 2022, Internet users opposed to the Cuban government and living in Spain called for a boycott for a concert that the group was to give at Sala Storylive! to Madrid.

Although a small group of Cubans – according to witnesses present – gathered outside the hall and protested against the group and the Cuban government, they did not stop the concert, as they had planned. . Several videos shared on the group’s official Facebook page prove that inside the hall, the concert went off without a hitch.

Then, in early February, Cuban residents in Canada started a petition on the Change.org platform to stop the group’s concerts scheduled for May this year. At Buena Fe The 2022 Canadian tour, which included shows in Montreal on May 20, Toronto on May 21 and Edmonton on May 22, has been cancelled.

However, according to an official statement released by Opera House, Toronto’s theater for the performing arts, the tour has been canceled due to “new restrictions on foreign nationals entering Canada effective January 15, 2022. All Incoming foreign nationals must have a brand of vaccines accepted by Canada to enter the border. Buena Fe does not yet meet this requirement.

Israel Rojas and Yoel Martinez posted a video on their official Facebook page confirming the Opera’s statement and dismissed the idea that the cancellation of their concerts was a victory for those who oppose it. They defended Cuban vaccines and said they would not receive a foreign vaccine: “we will wait for our vaccines to be recognized” and “we will go play there when our vaccines are recognized”.

The group’s public performances off the island were not the only source of controversy. The last concerts of their national tour and on the stairs of the University of Habana for the anniversary of the FEU (Federation of University Students), last December, were accompanied by photos with messages on social networks that spoke of the empty of places.

Peeling off these images, the band’s official Facebook page shared videos of their shows in Bayamo, Guantanamo, University Hill, where the camera deliberately spans the concert hall to show that venues are not were not empty.

In a live stream on Facebook, Israel Rojas explained that “they had very good feedback from the public” at Guantanamo and Granma, and that they were “very well attended concerts”.

Their audiences weren’t the only ones being questioned. Ticket prices in the current environment have also been questioned. The announcement of a dinner/concert by the group at the La Cecilia Tourist Station on December 24, at a cost of 2000 CUP per person, has sparked numerous comments of dissatisfaction on social networks. Social media users questioned whether the band consented to the price of their performances and argued that the minimum wage for a Cuban was only 2100 CUP, among other things.

After the implementation of the monetary “reform”, the prices of cultural and sporting events in Cuba skyrocketed and the Ministry of Finance and Prices Resolution 328, issued in December 2020, established price caps on the ‘current price increase, with different types of allowances. According to the regulations, local music concerts were priced up to four times the original price before the reform, and national music concerts up to five times.

In a context of economic crisis, the high prices of cultural products widen the access gap for a large part of the population to them, although this does not only concern Buena Fe. In recent months, ticket prices for many artists’ concerts have made headlines, and the most outrageous was a concert by urban music duo Kimiko y Yordy in Cienfuegos, which sold for 24,000 pesos a ticket.

Questions about Buena Fe were also fueled by some controversial statements and comments from Israel Rojas.

His most controversial statements were recently released in a live stream shared with Carlos Lazo and other musicians in November 2021. In the middle of their conversation, the singer said, “there are people still telling us, ‘ I don’t know how you guys ended up becoming…” What did I become? You’re the abnormal, no offense, I don’t want to insult you, you never understood our songs.

The remarks sparked criticism on social media for the artist, who explained on Twitter (@Israel_BuenaFe) that what he described as “abnormal” were “people who said they performed their songs from one way and now “ask him to account” for their OWN interpretation. He shared the entire live stream with Carlos Lazo on his personal Facebook page.

Shortly after these statements, the singer made another live broadcast while driving his Nissan car. The artist has been accused of being an opportunist and a hypocrite, because of this. A user by the name of Abel Castro wrote “(…) modern Nissan, you are [Government] continuity”, Buena FeThe official Facebook page responded with the concept of envy: “Envy mainly comes from not having something and seeing another person have it and want it (…).” The response sparked a heated debate between opposing positions, reaching 1,200 comments on the social media platform.

The leader of At Buena Fe controversial opinions were recalled by Cuban comedian Alexis Valdes, who a few days ago shared on Facebook a fragment of an interview he gave ten years ago when the group visited Miami. In the interview, Valdes questioned Israel’s use of the phrase “darn Ladies in White”, which he said during a concert at La Tropical in 2010. The singer admitted that it was “an unfortunate comment”.

Social media in Cuba is an extremely politicized landscape, where users ask for definitions and question the benefits of being close to the government in a national situation where culture is leading this dispute. Buena Fe used to criticize corruption, government actions in their songs, and now they support the government without saying a word.