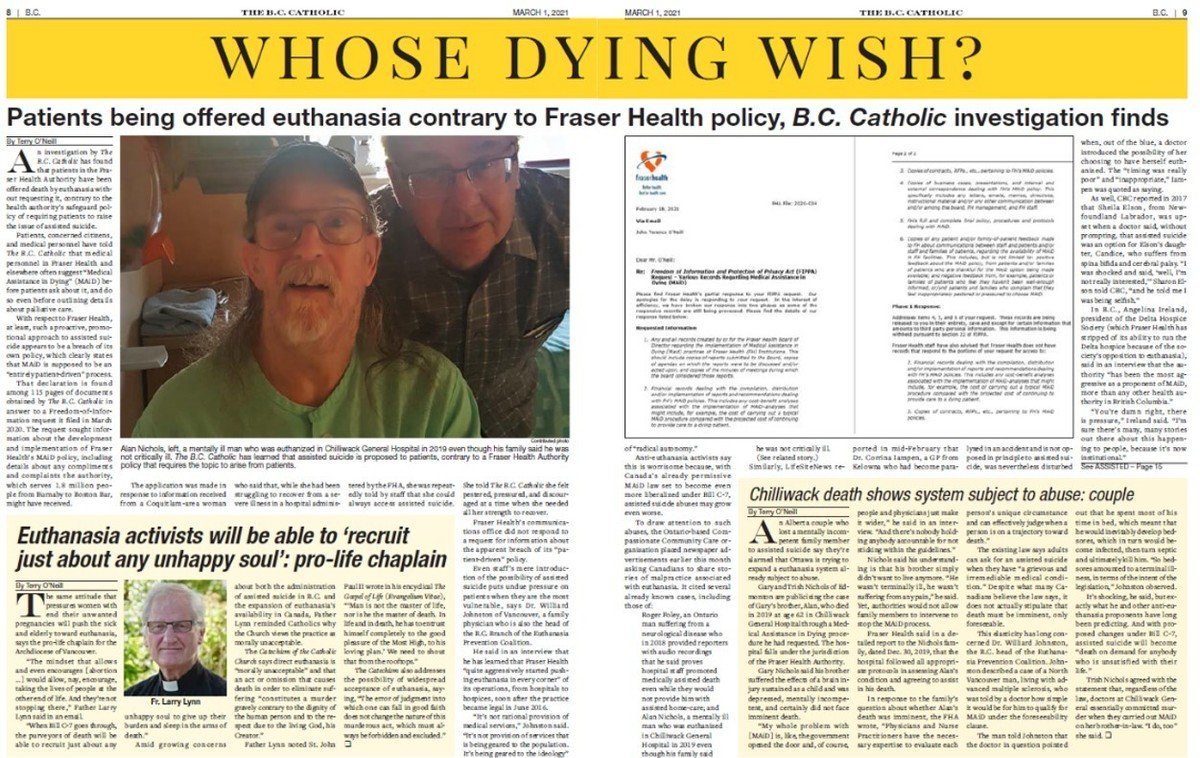 BC Catholic and its team have received 11 awards from the Catholic Media Association, including a runner-up in the Best Weekly Newspaper category.

On March 1, 2021 from O’Neill presents “Whose Dying Wish?” won first place for investigative news writing as well as best local/regional news writing for weeklies with one to five employees. The judges called his set of stories an “excellent investigation” that was “thoroughly reported, well written on an important and timely issue.”

The judges also gave O’Neill third place for investigative news writing for his June 7, 2021 article, “The ‘mass grave’ narrative doesn’t need answers.” O’Neill’s work has been called “excellent” and was one of the first media reports to raise questions about part of the original narrative of the Kamloops boarding school announcement last summer.

BC Catholic’s coverage of the residential school story last summer also earned it second place in the Best Newspapers category for papers with one to five staff.

“This post pulls it all together,” the judges said, “including extensive coverage
apologies from church leaders and a possible meeting of an indigenous delegation with the pope. Letters to the editor and stories from school survivors round out the excellent coverage. The newspaper still managed to find space for inspiring stories about the Eucharist, abortion and the pandemic, including insight into how restrictions caused by COVID were wearing down priests.

Deputy editor and journalist Agnieszka Ruck won three writing awards, including second place in the category of best personality profile (1 to 5 employees) for her feature film “Despite a handicap, the singer embraces the” gift life “with CD”, about a singer-songwriter Melanie Krishna who lives with cerebral palsy and blindness.

Ruck “perfectly captured the subject’s personality and zest for life,” said the judges, who called the article “an easy and fun read, enticing the reader to go listen to the subject’s CD to get to know her better.”

Ruck received third place for Best Vocations Reporting with his feature “Future Deacons Await Ordination with Joyful Anticipation.” The judges noted the quality of Ruck’s writing and said the article stood out by telling the deacons’ stories in their own words.

Ruck’s writing also earned him third place in immigration coverage with an article appearing in the Knights of Columbus’ Columbia magazine as well as The BC Catholic. “Opening the Doors of Brotherhood” told the story of the first Chinese council in British Columbia and how it bridged cultural and generational gaps.

Inca designer Siojo won second place in the Best Graphics or Information Graphics category with “One Year Report, How the Church of Vancouver Responded to the Pandemic.” The graphic appeared in the newspaper’s year-long COVID edition in March.

The judges said: “The information and numbers in bold in this graphic are easy to interpret and complement the article well. The timeline at the bottom is useful and the
coronavirus graphics add to the impact of the overall presentation.

The newspaper’s work with the Communications Office was also recognized in the annual report category, taking second place with the Archdiocese of Vancouver’s 2020/2021 Annual Report “The Joy of Family.”

Created by Siojo and writer Krista Greig, the entry “had a strong mix of text and images” and “offered meaningful details about the archdiocese’s fundraising, spending and accomplishments.”

A judge said, “I got a clear idea from the document about what the Archdiocese of
Vancouver did, where (and how many people) they served, what their values ​​were, and who a big part of their staff were.

Schratz said the awards “confirm the professionalism of the journalistic work done” by the paper.

“Never has it been more important to support independent media that provide reporting and commentary that counters the narratives and storylines that dominate all traditional channels and platforms,” ​​he said.

The awards, which were announced Thursday at the 2022 Catholic Media Conference in Portland, Oregon, bring the total number of honors for The British Columbia Catholic This year.

In May, the newspaper received eight awards from the Canadian Christian Communicators Association, including two for O’Neill’s investigative work into the unauthorized expansion of Fraser Health Authority assisted suicide in its hospitals.

The conference and awards ceremony took place live after a two-year absence due to the COVID-19 pandemic.

Freedom of association is essential for trade unions