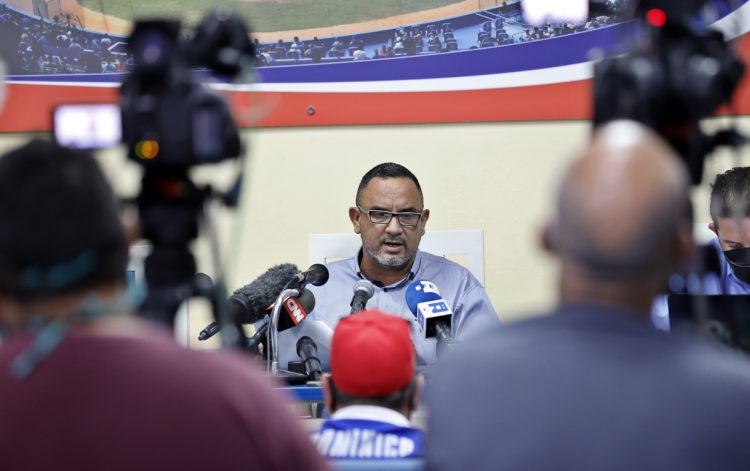 Baseball: the Cuban federation rejects the association of professional players created in Miami

The newly elected president of the Cuban Baseball Federation (FCB), Juan Reynaldo Pérez Pardo, gave a press conference this Tuesday at the Latin American Stadium, in Havana, during which he addressed various current issues for the sport on the island and the projections of the federation he leads.

Before answering questions from the media, the official published a document in which he establishes his position in relation to several of these issues, including the recent creation in the city of Miami of the Association of Cuban Professional Baseball Players (ACPBP). .

This entity, which has received the support of several former players and active players, as well as a group of fans from inside and outside the island, has announced that one of its objectives is to form a team with players inserted in the major leagues (MLB) to represent Cuba in international tournaments, including the 2023 world classic.

In this sense, the FCB document indicates that it rejects what it considers a “new monstrosity created by the enemies of the Revolution” and underlines that its position enjoys the public support of the World Confederation of Baseball and Softball ( WBSC) and other international organizations.

Baseball: The World Confederation rejects the team with MLB players without the support of the Cuban federation

About the WBSC, the text highlights the “long and fruitful working relationships”, “amplified in recent years by its president Riccardo Fraccari and the unfortunately deceased Higinio Vélez Carrión”. Furthermore, he states that “giving legitimacy to the CABPP would set a disastrous precedent for the development of baseball around the world”.

For its part, the FCB questions the “clearly political and discriminatory” objectives of the newly created organization, as well as its declared intention to “usurp the role assigned to the FCB in terms of training and approving the participation of our country’s teams in international competitions”. events, including the World Classic, contractually linked to the World Baseball and Softball Confederation.

With regard to relations with the MLB (another of the organizers of the Classic), the Cuban federation expressed in its statement its intention to extend the “respectful, ethical and professional” rapprochement that led to the agreement between the two entities signed in December 2018 and subsequently disabled by Trump administration.

FCB stresses that it aspires to maintain a stable and non-politicized relationship with MLB “which guarantees the natural flow of Cuban players to and from this circuit” and that the unfortunate agreement represented “an effective tool against illegal emigration, human trafficking and other risks to our players and their families.

For the Cuban side, vetoing the aforementioned agreement meant depriving the FCB of relationships similar to those that MLB has with various leagues around the world such as the Japanese, Korean and Taipei, among others.

However, the document does not refer to the arguments of critics of the agreement and the administration of President Trump at the time, who pointed out that the FCB was a Cuban government organization and that its relationship with the MLB violated the provisions. of the economic and financial framework. embargo imposed by the United States more than six decades ago.

The FCB also points out in its document that those who play in the MLB do not constitute exceptions in its objective to summon Cuban players residing abroad for certain international commitments, and that when the time comes “the calls will be designed according to the importance of the event and the technical-tactical requirements” .

Other issues addressed in the statement were Cuba’s vision of Caribbean Series and the relationship with the Caribbean Confederation of Professional Baseball (CBPC). He recognizes this tournament “as a natural competitive scenario for the champion of our national series”, taking into account that Cuba was one of its founding countries. Thus, he defends the right to be a full member of the CBPC, a position he assumed in the editions organized between 2014 and 2019 which Cuba attended as a guest.

Relations between the FCB and the CBPC deteriorated sharply when Cuba interrogates the position of the regional body and its president, the Dominican Juan Francisco Puello, and considered that they had yielded to “arbitrary pressure from the United States” to prevent the Cuban team from obtaining the visas to attend the 59th edition of the tournament held in San Juan, Puerto Rico in early 2020.

In addition to the election of the new president, the Cuban Baseball Federation (FCB) also renewed the members of its executive.

According to Information from jitPérez Pardo, who has held the position of National Commissioner since September 2021, holds a doctorate in physical culture sciences and succeeds Higinio Vélez Carrión, who died on May 12 of the same year due to complications related to COVID-19 .

From now on, the vice-presidential positions will be filled by Rodolfo Puentes Zamora and Germán Mesa Fresneda, two former players with notable careers in the National Series and in international tournaments, media reported.