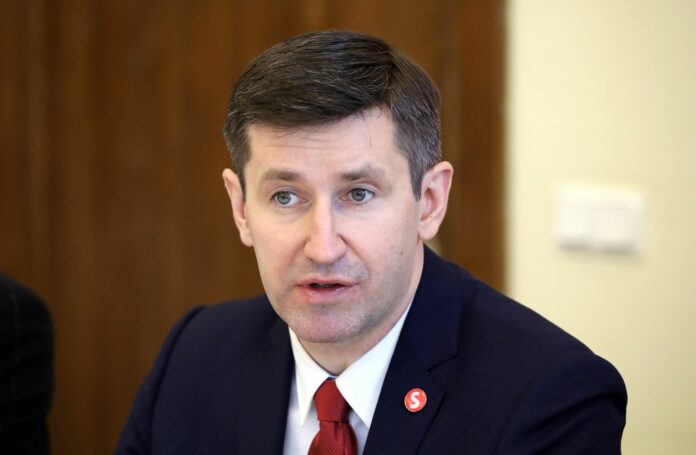 Saeima MP VjaÄeslavs Dombrovskis plans to found his own political party at the end of August. He says it will be based on the work done by the recently founded association Republic 2030.

The politician did not say whether he was considering giving the political party the same name. He said the name will be known on the party’s official founding day, which is slated for late summer.

At the same time, the Saeima deputy insisted on keeping the names of potential party members secret, adding that their names will be known on the day of the official founding of the party.

Dombrovskis says he is actively recruiting potential members. He says he has no doubt that he will be able to get 200 members.

According to the information available on the website of Republic 2030, its board of directors is made up of former Harmony deputy and former State Secretary at the Ministry of Education and Science Evija Papule, retired Colonel Raimonds Rublovskis, lawyer and former director of the Latvian State Chancellery Elita Dreimane, the member of the board of directors of Daugavpils Ditton Driving Chain Factory and once the manager of SIA RÄ“zeknes satiksme JevgÄ“nijs KorÅ¡enkovs, former director of the State Data Inspectorate Signe PlÅ«miÅ†a, economist Sergejs Gubins, former employee of the Central Finance and Procurement Agency ArtÅ«rs Grigorjevs, consultant, musician and former editor-in-chief of Diena newspaper Sergejs Ancupovs, former member of Saeima and Minister of Transport Anrijs MatÄ«ss, as well as former State Secretary of the Ministry of Environmental Protection and Regional Development and former Chairman of the Board of Directors SIA Rigas Namu pÄrvaldnieks Alexander Antonovs.

Several members of the association had worked with Dombrovskis in the past.

Ancupovs has some political experience. He was formerly Anda ÄŒakÅ¡a’s advisor when she was Minister of Health.

Dombrovskis has previously said his party will run in the Saeima election next year.

He said in March that the association’s founders believed joining any established niche – right, center, left – to lead Latvian politics would be a dead end. That is why they do not plan to divide people on the basis of their nationality or their ideology. The main criterion, according to Dombrovskis, will be people’s achievements.

His new political party will be centrist, said Dombrovskis, claiming that it will be the first party in Latvia that bases its actions on a mission and a vision instead of calls to vote simply because “we are the same as our voters”.

The vision of the emerging political party makes Latvia one of the most developed countries in the world with an income equal to that of Sweden in the space of 20 years. â€œIf we keep going, we will never reach the level of Sweden, even in 100 years. This is why we will invite people to whom a vision is decisive, whatever their nationality or their ideology, â€said the politician. The new political organization also stresses that Latvia needs to reform its public administration and its constitutional structure. This would mean having a president elected by the people, single mandate electoral sites, a government with a greater role to play, and ministers with more duties and responsibilities.

Dombrovskis, who was elected to the 13th Saeima of Harmony, left the party and its Saeima faction last year.