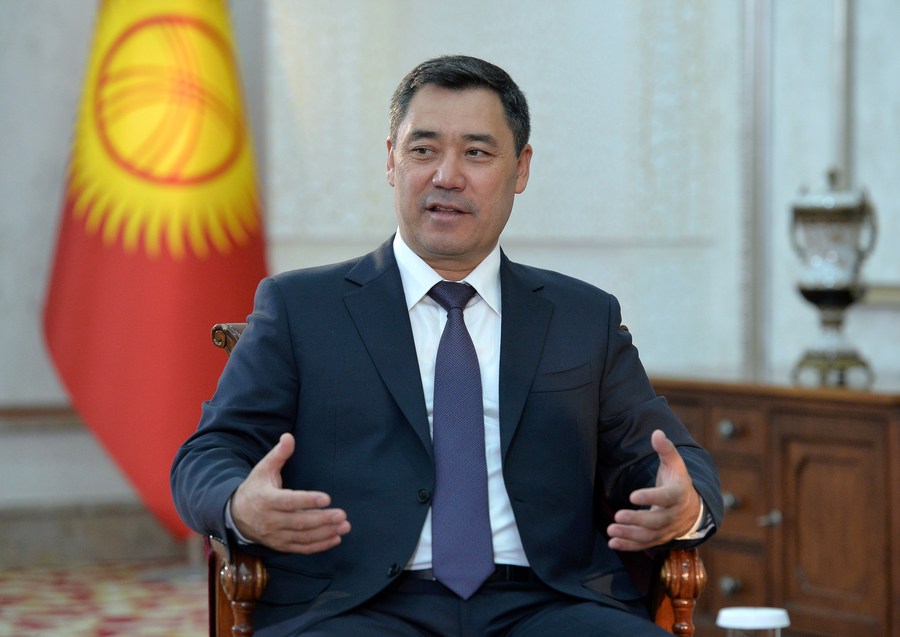 “We know that the Communist Party of China regards the struggle for a happy life for the Chinese people and the rejuvenation of the Chinese nation as its top priority, its goal and its historic mission,” Kyrgyz President Sadyr Zhaparov said, adding that it was clearly demonstrated by the current fight against the COVID-19 pandemic.

BISHKEK, Sept. 6 (Xinhua) — “If a party is motivated by selfless goals, striving for the common good, prosperity, the welfare of the people, then such a party will always be supported by its people,” said the Kyrgyz president. Sadyr Zhaparov said of the Chinese Communist Party (CCP).

Since its founding in 1921, the CPC has followed a glorious path of development, Zhaparov said in a recent written interview with Xinhua and other Chinese media.

Under the leadership of the CPC, China has made current achievements in political, economic, social and other development, he said.

In more than 40 years, China has successfully implemented its reform and opening-up policy, improved people’s living standards and raised its prestige in the world, Zhaparov said.

Last year, China achieved its first centenary goal of building a moderately prosperous society in all aspects, and historically solved the problem of absolute poverty, the Kyrgyz president said, adding that China has become the second largest economy in the world and an example for the world.

“We know that the Chinese Communist Party regards the struggle for a happy life for the Chinese people and the rejuvenation of the Chinese nation as its top priority, its goal and its historic mission,” he said, adding that it was clearly demonstrated by the current fight against the COVID-19 pandemic.

The CPC, putting people’s health and safety first, is taking timely and active measures against the spread of the pandemic. Thanks to these efforts, China is one of the first countries in the world to successfully contain the pandemic and achieve economic recovery, the Kyrgyz president noted.

In February, Zhaparov attended the opening ceremony of the Beijing Winter Olympics and was deeply impressed by the event’s official slogan “Together for a shared future”.

“It is a call to the international community to build a community with a shared future for humanity. Whether we are a small country or a large country, in the context of globalization, we all have a future and a destiny. All Current issues and challenges are interlinked and we must resolve them together through dialogue and cooperation, respecting each other’s interests,” he noted.

Zhaparov said the Global Development Initiative proposed by Chinese President Xi Jinping is in line with the trend of the times and the aspirations of people in all countries: the desire for peace, cooperation and development.

“I would like to emphasize that Kyrgyzstan supports the Global Development Initiative and is ready to make its own contribution to the implementation of the initiative,” he said.

Zhaparov said January 5, 2022 marks the 30th anniversary of the establishment of diplomatic relations between Kyrgyzstan and China. “Today, Kyrgyz-Chinese relations are developing vigorously and are at a high level, covering political, economic and cultural fields,” he said.

Kyrgyz-Chinese relations have been time-tested and have developed into a comprehensive strategic partnership, he said.

“We are now enjoying the fruits of this partnership: strengthened political mutual trust between the two countries, active development of security cooperation and expanding economic and trade cooperation,” Zhaparov said.

He added that in the international arena, the two countries support each other on issues of mutual concern and carry out cooperation in frameworks such as the United Nations, the Shanghai Cooperation Organization, the Conference on Interaction and confidence-building measures in Asia and China + Central Asia Cooperation Mechanism.

Against the backdrop of a rapidly changing international situation and growing instability factors, the Belt and Road cooperation proposed by President Xi has created the conditions for maintaining regional peace and stability.

The Kyrgyz President stressed that the BRI gives the Central Asian region an opportunity to solve the strategic task of direct access to seaports and to transform the region into a crossroads of transcontinental highways from east to west and from north to south.

In this regard, the implementation of the China-Kyrgyzstan-Uzbekistan railway project will be an important step to fully unleash the region’s transit potential, he added.

“In recent years, with the help of China, Kyrgyzstan has implemented a series of projects in the fields of infrastructure, transport, energy, medical care, education, irrigation and other areas. It should be noted that the opportunities for strengthening practical cooperation between Kyrgyzstan and China are unique, (and) the implementation of the combination of countries’ development strategies meets the fundamental interests of both parties,” he said.

Zhaparov noted that currently Kyrgyzstan’s national development focuses on green development, innovation, digital and creative economy, and Kyrgyzstan intends to strengthen cooperation with its Chinese partners in these areas.

“I am confident that expanding mutually beneficial trade, economic and investment cooperation among countries along the ancient Silk Road will help to enhance stability, political dialogue and economic progress in the region. “, said the Kyrgyz president. ■