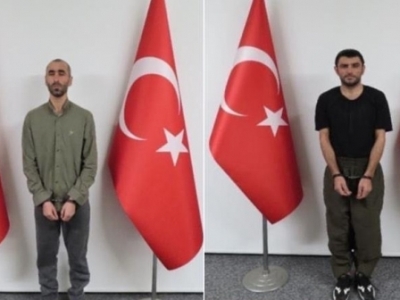 A Kurdish political organization on the surrender of its members to Turkey: Treason of the Armenian government

The co-presidency of the Executive Council of the Union of Kurdistan Communities (KCK) issued a statement condemning the Armenian government for handing over two People’s Defense Forces (HPG) guerrillas to Turkey, ANF reported. The statement reads as follows:

This attitude of the Pashinyan government also confirmed the criticisms and accusations made against it regarding the occupation of Armenian lands. This is evident in the fact that at a time when Armenian land is occupied, instead of supporting those who fought against the genocidal Turkish colonialist state, they were handed over to this state. This situation also constitutes a betrayal of the struggle of the Armenian people against the genocide. The handing over of these two friends to the Turkish state revealed the collaboration and betrayal position of the Pashinyan government, which had remained secret until today.

According to information published in Armenia’s “DataLex” judicial information system, Atilla Cicek and Huseyin Yildirim were charged with illegally crossing the Armenian border through the Araks River on August 16, 2021 and smuggling weapons and ammunition. In January 2022, the trial court of the Armenian province of Syunik sentenced Yildirim and Cicek to 7 years in prison; there was also a decision to confiscate funds. But later, the Court of Appeal of Armenia reduced the prison terms of these two KCK members to a suspended prison sentence with 3 years of probation.